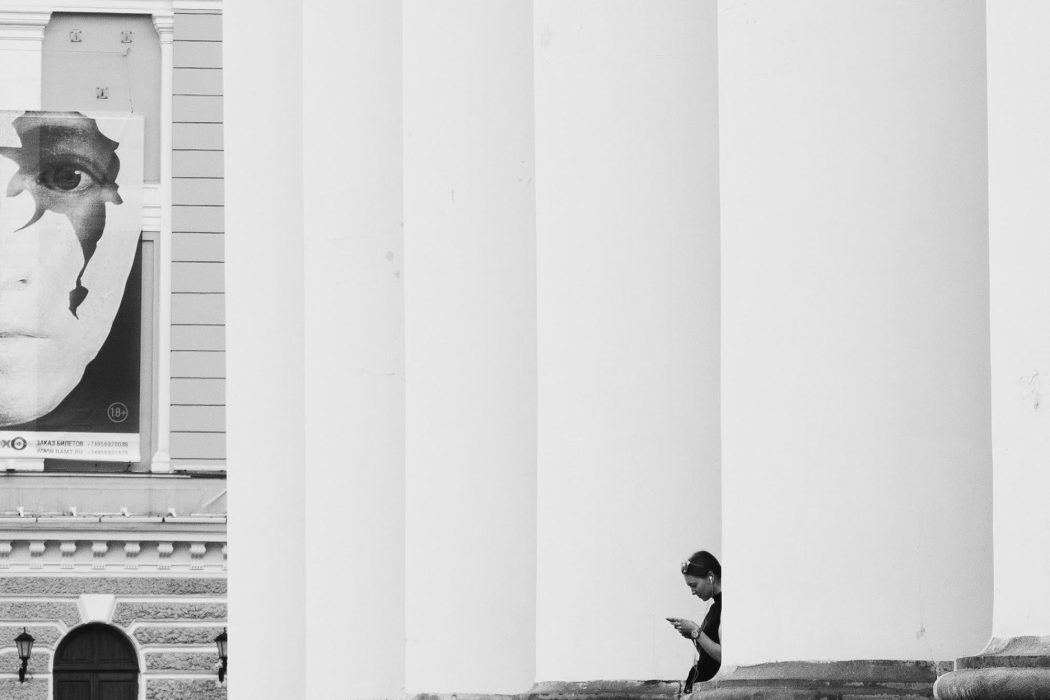 At times we tend to let it slip our mind that Russia is a fashion force to be reckoned with. Perhaps it was Ulyana Sergeenko who has reminded us just how powerful the Russian cultural influence on fashion is, and just how decadent and epitomizing of old-time glamour it can be. Well, Moscow truly brought it this season, and there are different kinds of glamour to behold, from the creations that will make you wish we could go back to St. Petersburg of the old days and flaunt our couture gowns while dancing to classical music, to those more contemporary but with a signature Russian decadent vibe. 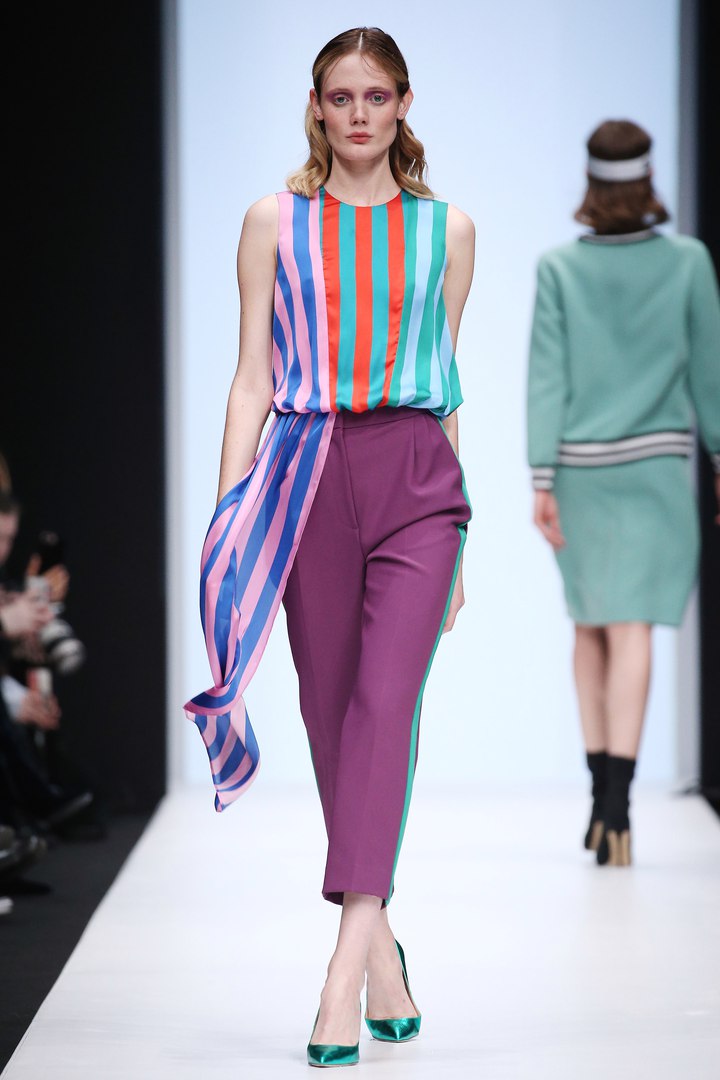 We’re quite familiar with color blocking at this point, but few have played with colors, sheer fabrics, draping and ruching all in the same garment. One of those few is Russia’s very own Alexandr Rogov, who has shown us once again, that sometimes more really is more. Through bold but careful selection and mixture of pastels and prime colors, he has broken the 4-color rule of color blocking, while somehow achieving to create dresses worthy of the classiest event out there, dresses so interesting and poignant but incredibly pleasing to the eye, it’s difficult not to want them.

The color of Russia 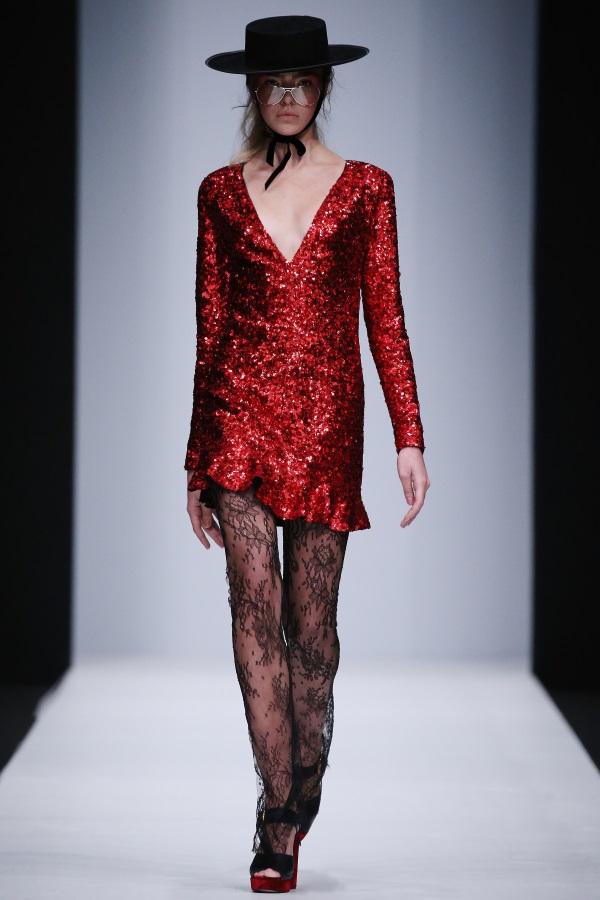 We’ve claimed the color red as the official color of the fall 2017, but we’re well-aware that this color is and always will belong to the Russians. They did take certain cues when it comes to trends from their western colleagues, but if we remember correctly, the sheer dresses in western runways were followed with poignant undergarments. Well, the daring Russians took it a step further and presented elegant but almost burlesque-like sheer gowns topped off with a faux fur blanket coat. The surprise twists – no bras. It’s safe to say they’ve upped the ante when it comes to sexy and spicy. There was also gentle sheerness mixed with plastic details at Atelier B’s show. From denim jackets on top of lace and plastic sheer pants, the designer surely made some bold choices, but once you catch a glimpse of a contemporary damsel with a sunbrella and a sheer baby pink dress, all is forgiven. 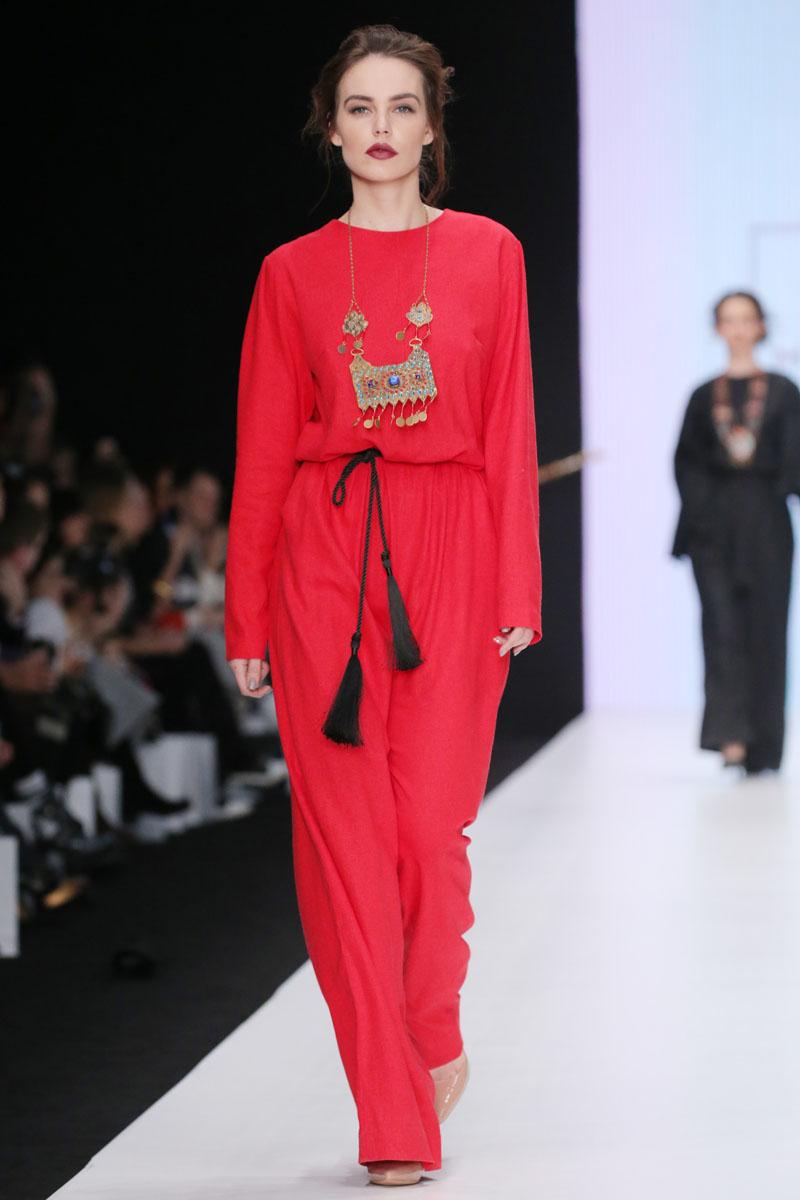 If you’ve ever fancied yourself as one of the characters from Victorian novels, adorned in lush dresses, multiple layers and rich overcoats with intricate embroidery and careful detailing on the hemline, behold this beauty presented by Mursak. You might need four horses and a carriage in order to pull this look off, but it sure does make us nostalgic for the centuries in which this would be ‘the bare minimum’.

Leave it to the queen 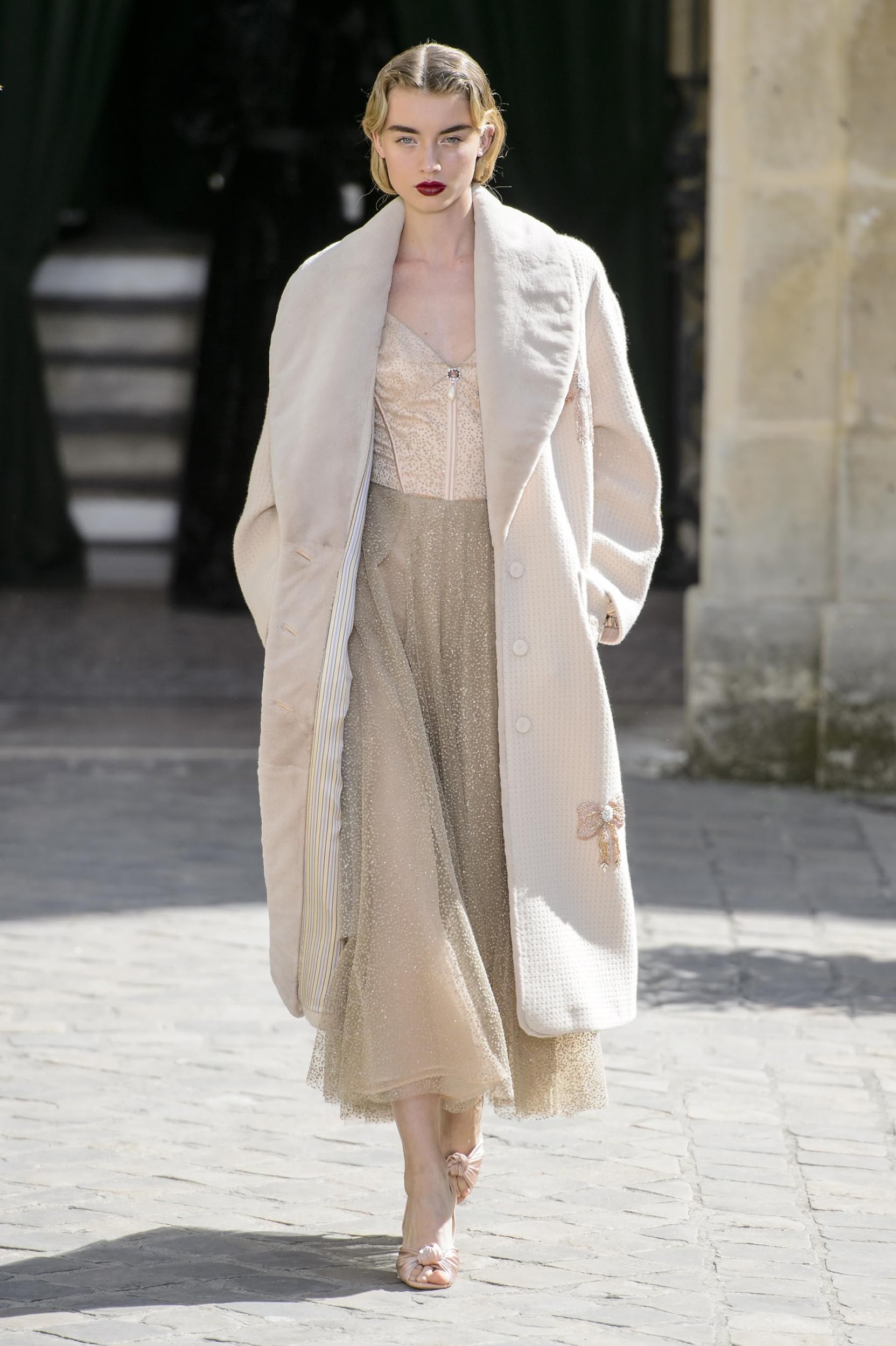 Still, when it comes to old-school glamour, we are still waiting for a designer who will do it better and more decadently, not to mention more reminiscent of Old Russia – with a contemporary twist than Ulyana Sergeenko. The cut on the white skirt, embroidered using almost vintage-like techniques takes a surprising twist with a semi-circular baby blue satin bodice. If that weren’t enough, there is the classing red sating belt to emphasize the waistline – much like corsets did in the old times, and then she slays it with a pair of what seem to be ball gloves, but it seems that they are merely unattached sleeves. Her entire collection oozes folk motives, with her signature contemporary take on them. Despite the fold element, there is nothing ‘folksy’ about the collection – these creations are red carpet worthy, and that’s where the ingenuousness of the designer lies.

They did it better 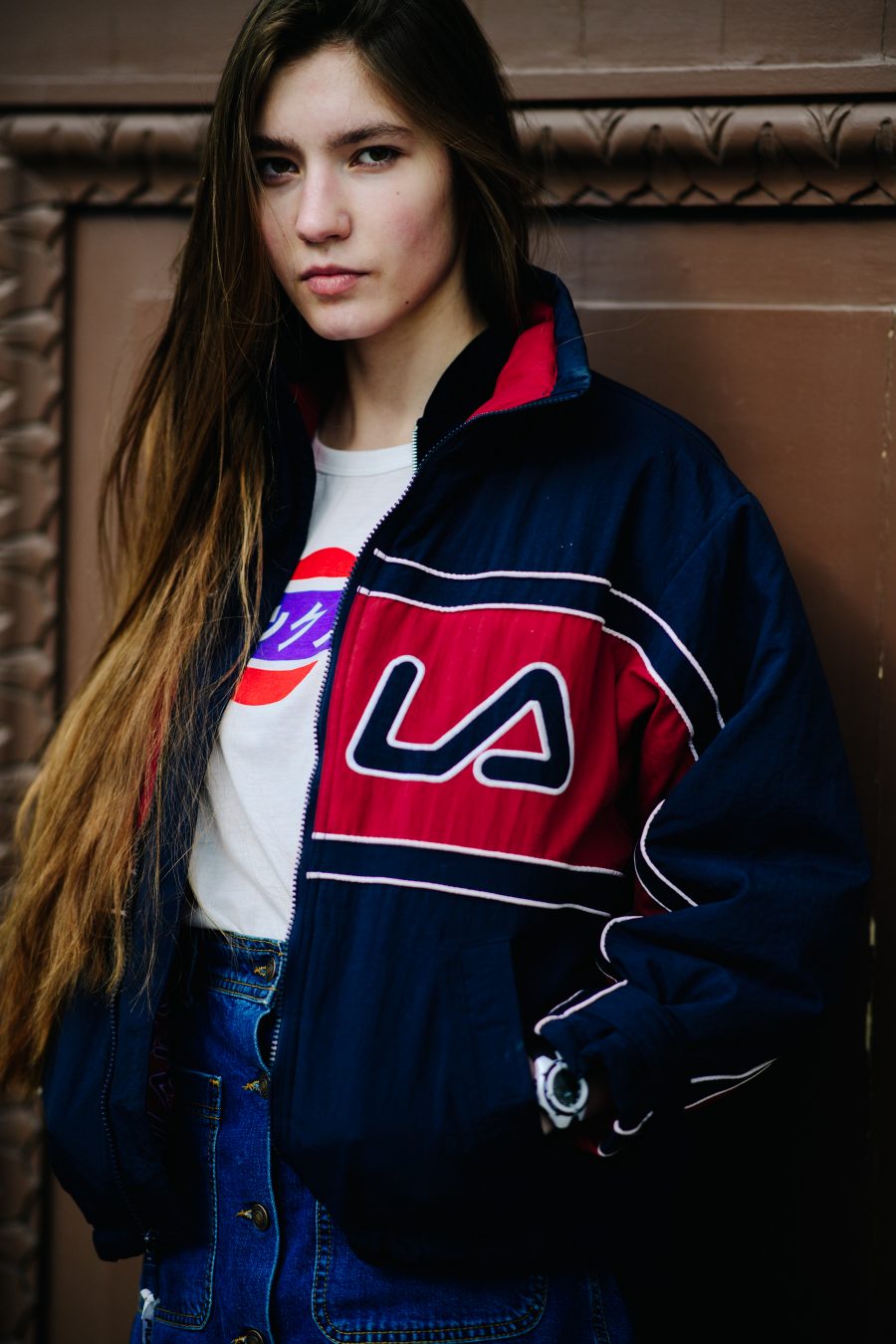 Perhaps you’re not aware of the phenomenon of squatting Slavs in tracksuits, but long before athleisure was a thing in the rest of the world, the Slavic nations had mastered the look to perfection, so we’re sorry to say but, Slavs rocked athleisure first. It therefore comes as no surprise that their Russia fashion week athleisure lines are actually better and bolder than us – case in point – a workout head band matched with a millennial pink ensemble consisting of a sporty top and a casual pencil skirt rocked with black thigh-high black boots. The only thing that’s missing is a pick from some of the finest classic womens leather bags, so we at least get some Bella Hadid vibes, but other than that, this is chic athleisure perfection. 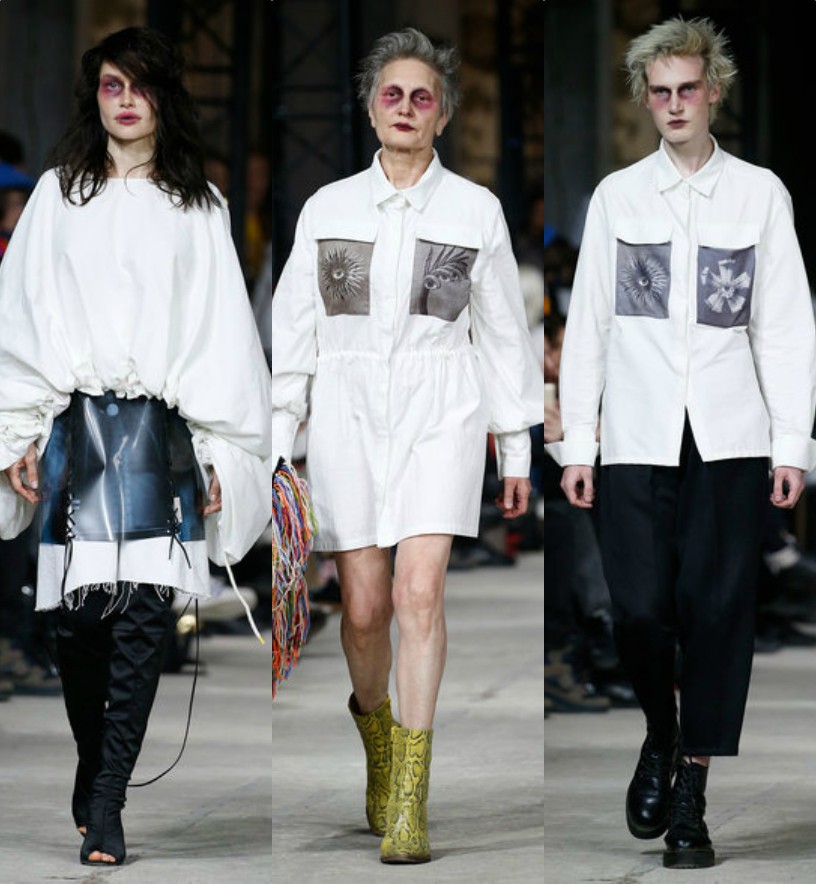 Watching Roma Uvarov’s murky and dark deconstructed collection at Russia fashion week was like being at one of the shows at London Fashion Week. The rebellious smudged makeup, models of all ages, as well as the edgy designs aren’t something you would typically expect from a Russian runway, but we guess they’re more similar to Brits than we had imagined. There were slogan-filled tops – possibly ones carrying a political message, disturbingly deconstructed white dresses with what appears to be either a plastic skirt or a corset that was repurposed at the very last minute. The looks send a strong and almost deranged message, but what they definitely aren’t is bland.

The future is already here

The power suit made its presence at Russia fashion week as well, however, in a slightly different variety than we’re used to. Namely, the fashion-forward Anastasia Dokuchaeva gave us a little taste of what a sexy futuristic female boss would look like, and it was spectacular. The shiny satin suit in metallic baby blue could be spotted from space, and if that weren’t extravagant enough, she made sure she sealed the deal with a pair of silver metallic gloves and a white bustier – over the blazer. The special rainbow-lensed sunglasses were the cherry on the futuristic sundae, so yes, look out, because the future is closer than we think.

This Russia fashion week was definitely all that we had expected and then some more. However, there was something to cater to every taste – from traditional and over-the-top elegant, traditional with a twist, romantic athleisure, color blocking, deconstructed fashion, so perhaps you’ll take a look at your current style and decide to make some changes that will be sparked by the familiar, yet completely original Russian rendition of the current trends.

7 Methods For Improving Your Everyday Health

f you knew that there were countless options you could take to improve your health, why wouldn’t you pursue them? There is nothing more…