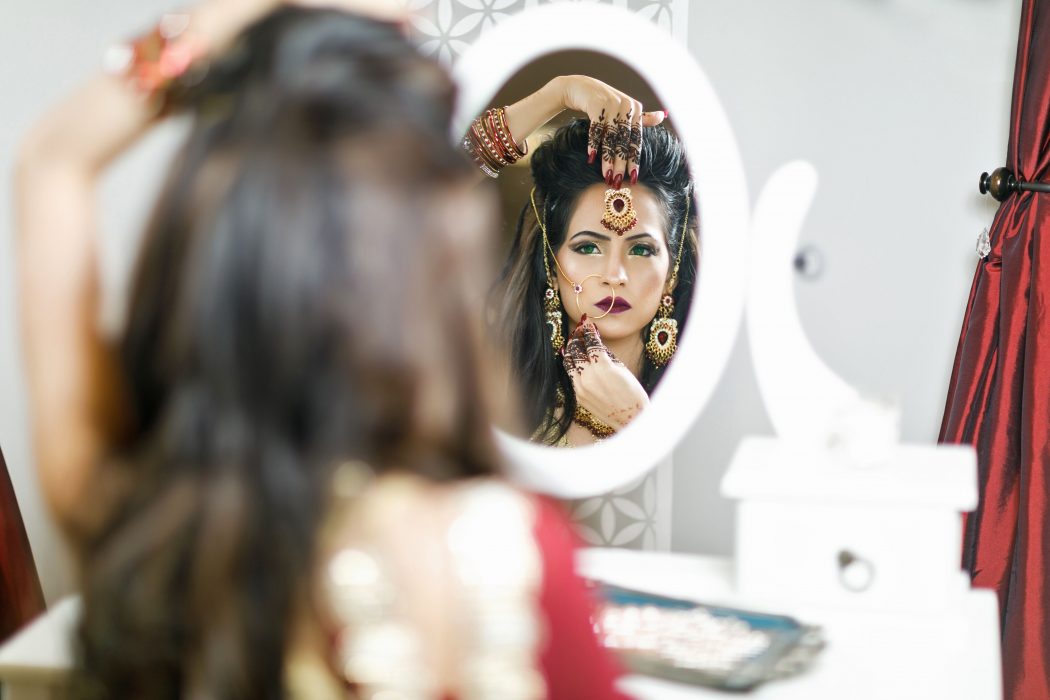 Every see Indian women adorned with jewelry from head to toe and wonder why they wear certain items? There is actually a deep significance in every piece of jewelry an Indian woman wears; it is not simply just for style or enhancing an outfit. The History of Indian Jewelry goes back to Prehistoric Times. Indian women, even those with the humblest background, generally possess some type of jewelry they can afford because of its symbols.

Indian woman wear these traditional pieces daily and we are going to break down a few of the most common types:

A “maang tikka” is what the jewelry piece is generally known as in Indian culture. It is a pendant at the front attached with a chain that is worn around the head. The pendant embellishes the center of the forehead.

The maang tikka is considered a vital part of bridal makeup. Traditionally, the wedding ceremony is the first time a woman wears a maang tikka. The symbolic meaning deals with the placement of the jewelry piece in the center of the forehead. The Forehead’s center, or “chakra” is believed to be a seat of preservation, so the woman adorns this on her wedding day. Traditionally, the chakra had two petals where the half-male and half-female deity Ardhanarishvara resides. It symbolizes the final union and undividable bond between man and woman. 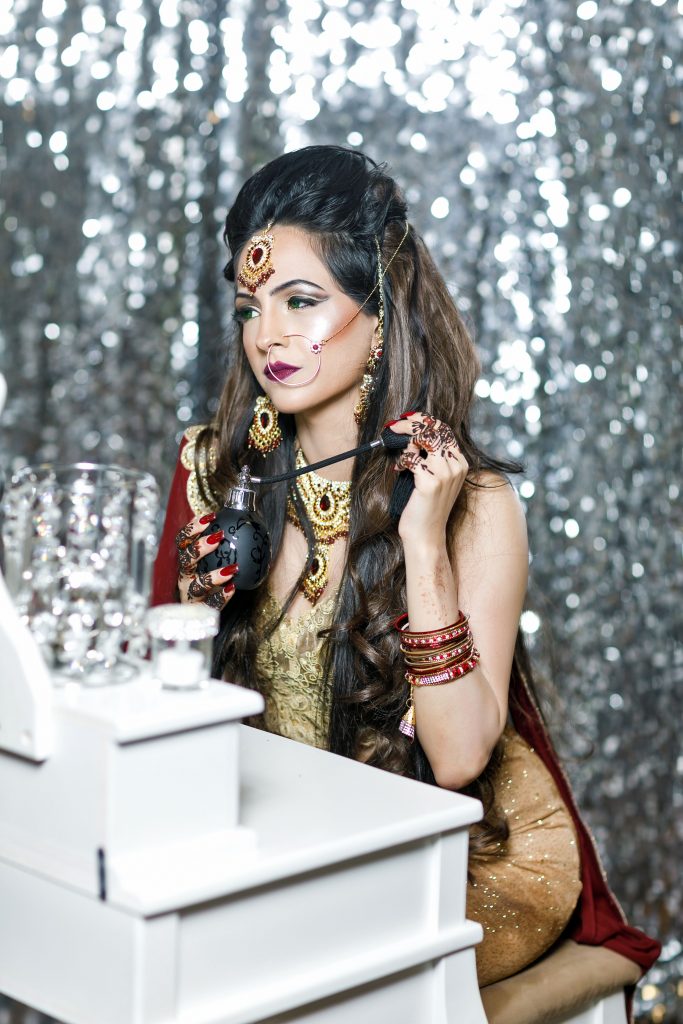 Nose rings in Indian culture are known by varying names, such as “nath,” “nathni,” or “Koka”. The Nose ring is the most seductive jewel. Traditionally, the majority of married woman wear this jewelry piece daily. In the Mughal era, it was composed of very tiny patterns, and Mughals were the ones who brought this with them from the Middle East. In certain traditions and parts of India, it is fundamental for a young lady to get her nose pierced for wearing a nose ring in childhood. According to the Hindu religion , nose piercing is considered as a way of honoring Parvathi, the Hindu Goddess of marriage. Nose rings are also linked to fertility. the common placement of the nose ring on the left side of the nose is from an ancient Ayurvedic belief that child birth will be less painful. The size of the nose ring was historically associated with financial status and power, as the larger and heavier material was an emblem of the bride’s family’s societal status. Traditionally, a bride could not get married without a nose ring because it symbolizes good fortune, which is still a very prevalent belief today. When a women became a widow, it was said that her Nath would no longer be present. Nowadays, the more sparkling a nose ring is, the more seductive and beautiful a woman is considered to be. 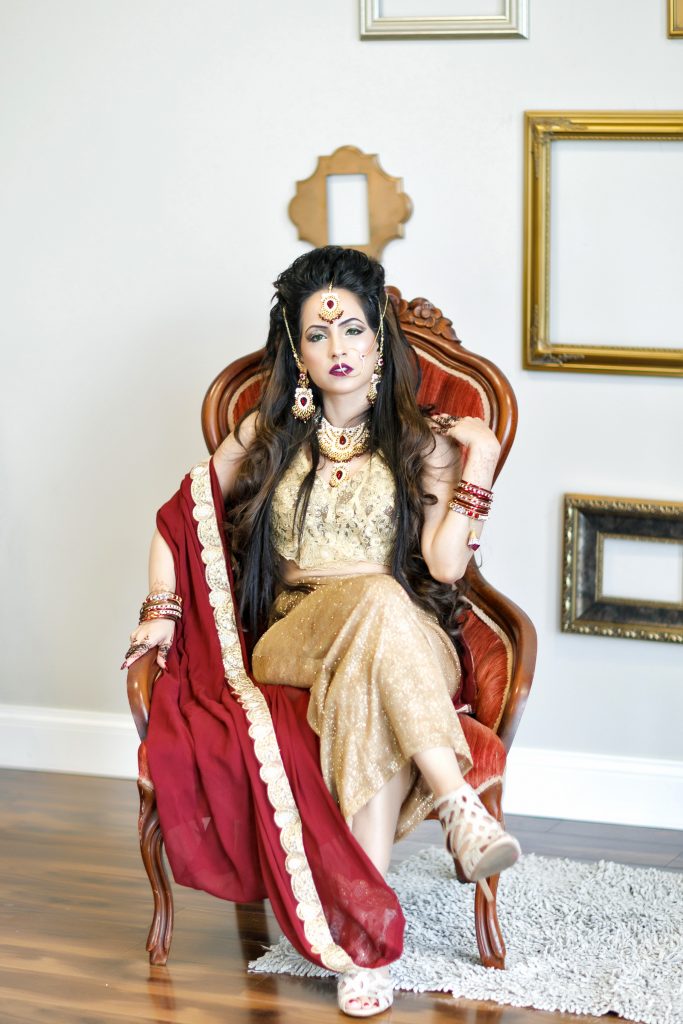 Haar in Indian language, one of the most exquisite bits of gems, is the necklace. Accessible in many designs and graces, the Indian necklace is a must-have in one’s trousseau. The Indian necklace has a ton of customary and nostalgic worth joined to it. Mostly necklaces that have been worn by various generations of a family are saved by every generation to hand over to the next one. The necklace is a gem that embellishes the slim neck of a lady and emphasizes her beauty and excellence character. Even the color of the jewelry and patterns have deep historical significance. For example, silver bead ornaments are especially popular in the states of Gujarat, Rajasthan, and Madhya Pradesh because it connotes the craftsman of the state and their origin. Many gold jewelry designs draw their inspiration from different styles of Indian jewelry are inspired by the designs of the Mughal dynasty. In Tamil Nadu, rows of pearls end in a pendant in which the symbol of Shiva and a lotus is encrusted in its base which has religious and auspicious implications. Flawless pearls were historically looked upon by royalty as a preventive symbol of misfortune. Necklaces garnished with of stones is believed to bind a woman with eternal powers. Since ancient times, necklaces and elaborate strings of beads were worn by ward off the evil eye.

Why You Need Organic Face Care Products in Your Life

Find out what ‘Organic Ingredients’ really means and why we use them! Have you ever considered what you put on your face? Sometimes we…