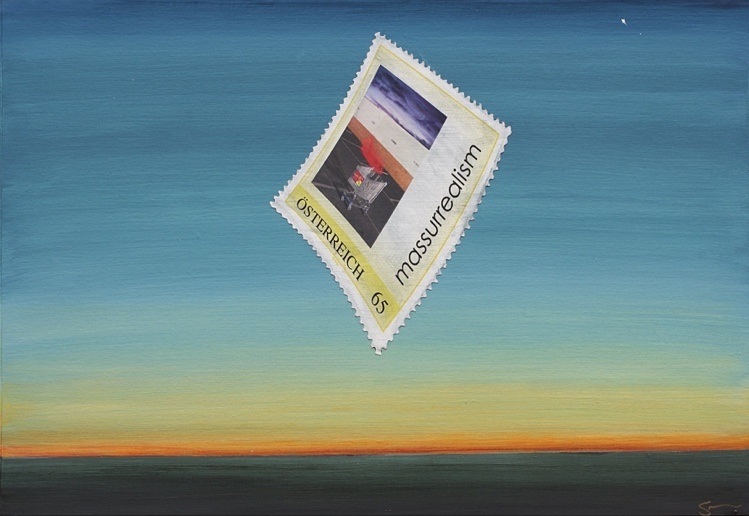 Apropos to all contemporary art today, I found this cool presentation on an art style that combines dreamlike imagery with influences from the mass media, especially via the advertising world. This prompted me to investigate further.

American artist James Seehafer coined the concept of massurrealism in 1992 in order to characterize his own work; an art form that creates surrealistic landscapes of the mind with technical means of the mass media; which also includes traditional techniques such as painting & collage. Massurrealism has since gained the enthusiasm of other artists and become a genre of interest.

The son of a professor of communication science, Seehafer studied at Parsons School of Design in New York, and exhibited in NYC’s East Village scene in the 1980‘s,. He later relocated to Berlin Germany in 2005 to continue to paint and work as a photographer. Among his works include various versions of his shopping cart series first done in the late 1980’s and early 1990’s.

With so much of massurreal art becoming apparent, we see the uses common objects and technologies in our modern world, the connection of art with the everyday items and life happenings is quite remarkable. Art rooted in common experiences is advantageous to continuous innovation for today’s artists. The different techniques used in massurreal art is conducive to different ways of making and viewing the works, as one can see examples of this style everywhere, even in the fashion world, that engages the public. Massurrealists artists have prompted a re-examination of the “what is art?” discourse in a way that follows a logical historical path.

Valentine’s Day is round the corner and are you looking for some tips on gift ideas to impress and surprise your loved ones? Here…