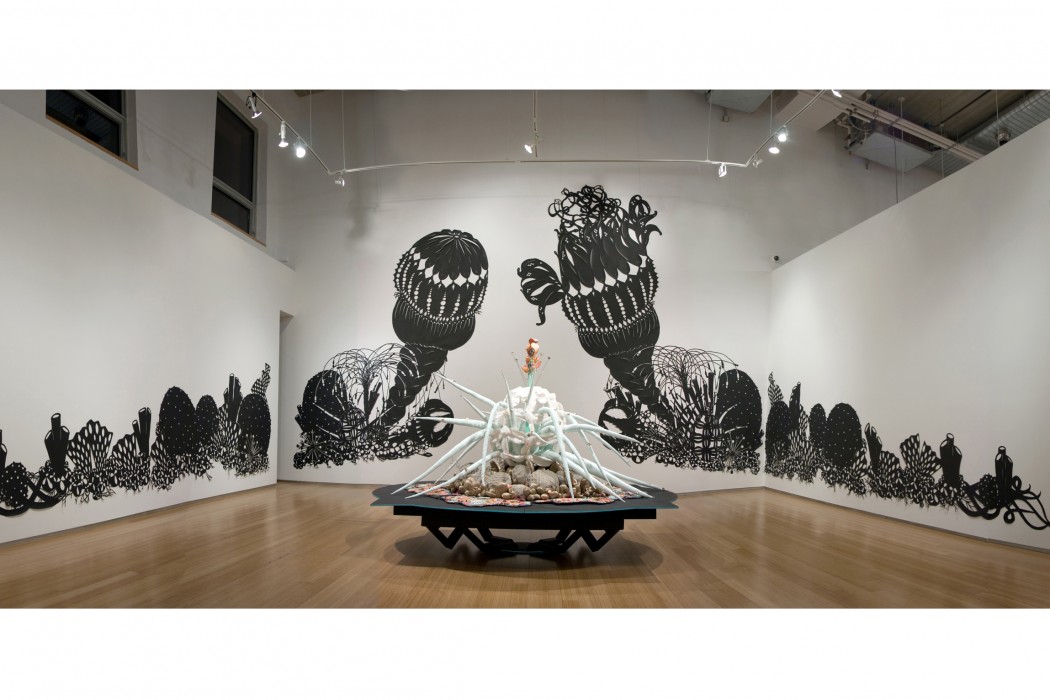 I think I am most proud of following through and making things that seem at first too impossible to manifest into reality. Like creating a life-sized diorama of an invented grizzly bear hybrid creature with all the accouterments that you might expect from a museum of natural history.

I had the privilege to interview visual artist Katerina Lanfranco, her work  is represented by the Nancy Hoffman Gallery, and is in the permanent collections of the Museum of Modern Art, the Kupferstichkabinett (Museum of Prints and Drawings) in Berlin, Germany, and the Corning Museum of Glass. She is also the founder and director of Rhombus Space, an exhibition space in Brooklyn, NY.

Tell us about yourself and what you do:
I am a visual artist living and working in Brooklyn, NY. I studied painting, along with visual theory and museum studies in Santa Cruz, California for my undergrad and then moved out to New York for grad school in studio art. Since moving to New York, I have lived out of the country twice. Once for 8 months in Europe during grad school, to study in Berlin (where I spent my early childhood), and to travel throughout Western and some of Eastern Europe – in the form of a Grand Tour. The other time was to do a 6 months artist residency based in Kyoto, Japan, where I studied traditional arts and crafts through the NEA Japan/US Friendship Commission in 2010.

I feel lucky to have a wonderful relationship with my art dealer, and my work has been represented by the Nancy Hoffman Gallery since 2006. I have a studio in Red Hook, Brooklyn, and make artwork that ranges in scale from tiny to room-sized, and in material as varied as paper, canvas, glass, and fabric. 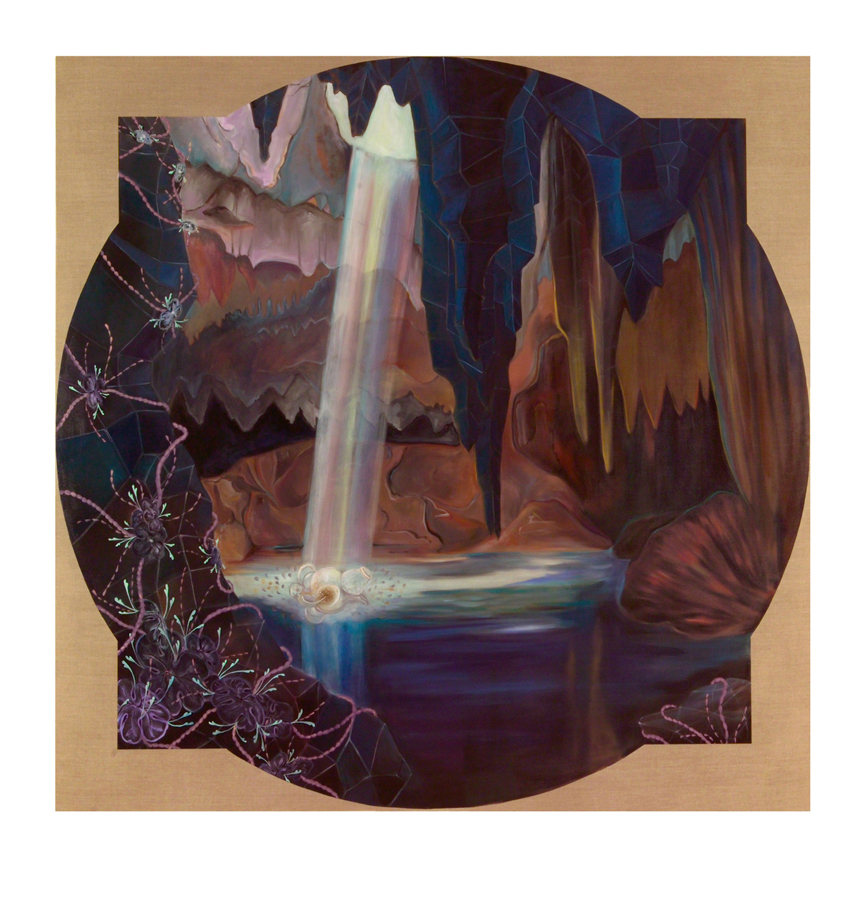 Who has inspired you in your life and why?
My brother Carlos has been a huge source of inspiration and guidance for me during my life. He always has such an expansive perspective on ideas I might have or questions that come up in my life/art practice. I’ve been very fortunate to have unbelievably gifted and generous artistic mentors in my life as well. In California, the artist Don Fritz was my drawing and mixed media instructor. He taught me almost everything I know about mixed media and collage, much of it went into the course I developed for the Museum of Modern Art in New York that is currently available to a global audience. Another artist mentor, Joyce Brodsky, introduced me to art theory and the idea of pedagogy as a possible art form. She taught a class about making paintings that weren’t paintings – something that still impacts my studio practice today.

In New York, a huge inspiration has been the artist Valerie Jaudon, a formidable painter and Feminist intellectual. I studied with her, and then was her teaching assistant and artist assistant. I see her as a role model for how to balance art and life, and to stay true to one’s ambitious artistic visions. While being her artist assistant I got a first-hand account of how an artist needs to make space, in terms of time, place, and mental focus – in order to prioritize time in studio, and to work through studio ideas without getting derailed. I think really committing to one’s studio practice, and understanding that having other jobs and sources of income keeps the studio practice alive and well. When it’s a closed loop between making art and selling art, market pressures can make you second guess yourself in studio. A little bit of financial freedom in one’s artmaking can go a long way. 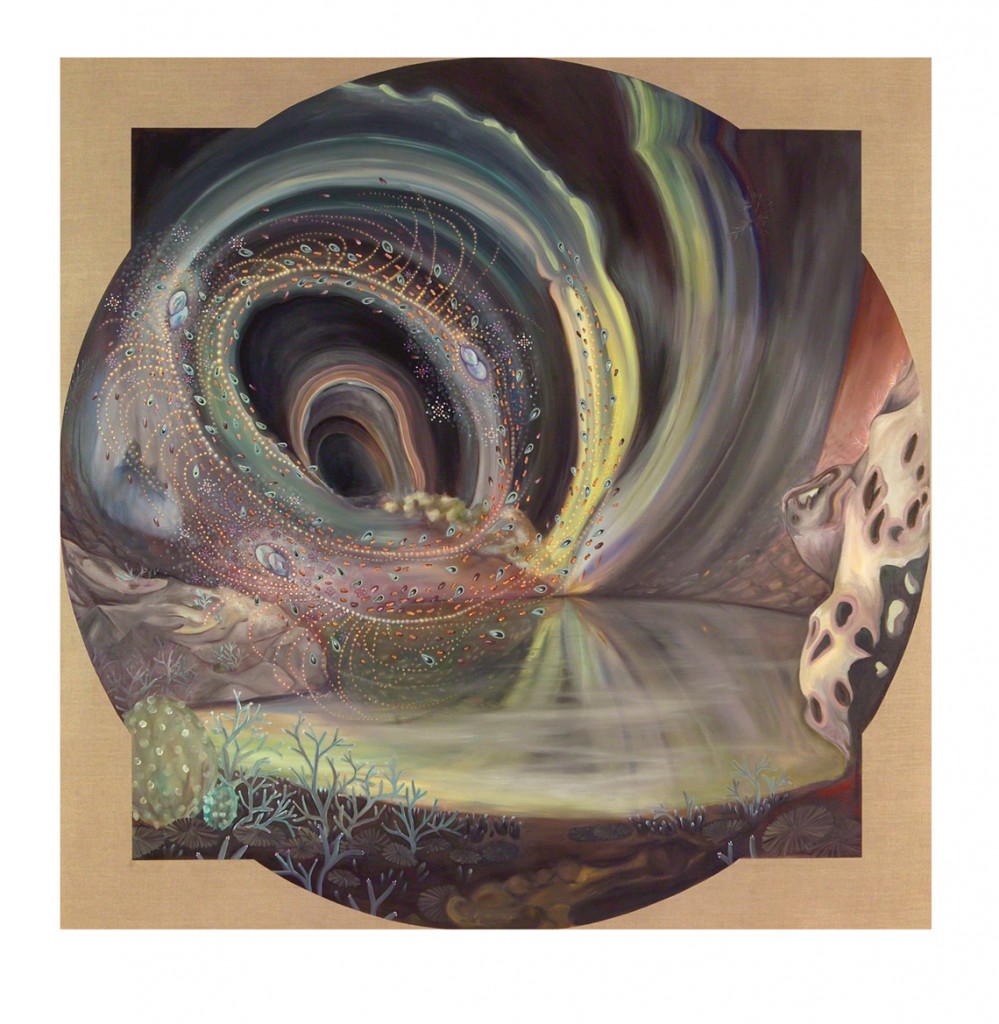 What is your greatest achievement so far?Wow, that’s a hard question. I think I am most proud of following through and making things that seem at first too impossible to manifest into reality. Like creating a life-sized diorama of an invented grizzly bear hybrid creature with all the accouterments that you might expect from a museum of natural history. By the way, I have to also list the American Museum of Natural History as a treasure trove of artistic inspiration. There have been many small moments that have felt particularly fantastic, like when my first art sales were of works that went into the permanent collection at the Museum of Modern Art, or being able to teach art in places that epitomize the best in art and nature institutions such as the MoMA, Brooklyn Botanic Garden, and American Folk Art Museum. I also have to include in this list (yes, sorry it turned into a list…) establishing Rhombus Space, an experimental exhibition space, and mounting what I think are awesome curated shows of my contemporaries’ artwork. This has parlayed into a position as Chief Curator at the Trestle Gallery in Gowanus, where I am honored to work Rhia Hurt an artist and art community visionary, and with an even broader community of contemporary artists and curators.

Do you have any tips for our readers that are trying to break in the industry?
First give yourself the time and space to make art. This is harder than it sounds but when opportunity strikes you have to be ready. The painter, Georgia O’Keefe once said that you had to have at least 3 shows ready to exhibit at any time. I wish I could say that I had 3 ready, but I do agree with the idea. Valerie Jaudon thinks of luck as prepared readiness. There’s truth to that. Secondly, the stereotype of the lone artist working by candle light in the attic with divine inspiration is totally outmoded, and that so much inspiration is from taking in the wondrous beauty of life and translating into artwork. During my “Grand Tour” of Europe I was stunned by how much artists’ environments impacted their work, it seems like common sense, but to actually see the furniture and tapestries that made their way into Henry Matisse’s work, in the museum displaying his life was shocking. Or how the real springtime landscape in Sienna, Italy, looked like something in a Botticelli or da Vinci painting was totally revealing that one doesn’t have to look so far afield for artistic inspiration.

I also think that it is important to be an active part of an artistic community. Yes, making art is a relatively solitary activity, but engaging in an artistic dialogue isn’t. Pablo Picasso and Georges Braque worked practically shoulder to shoulder to develop Cubism, which became one of the most profound art movements of the 20th Century. It was the camaraderie, mutual inspiration and friendly competition that created the fertile ground for this major artistic development. I also think it is vital for anyone making art in 2015 to participate in the global community that exists online and through social media. It is an unprecedented kind of instantaneous travel and cultural dialogue. Lastly, I think that being courageous and determined are important. There are so many obstacles in just getting started, including that internal critic everyone carries around that needs to be hushed-up during the creative process.