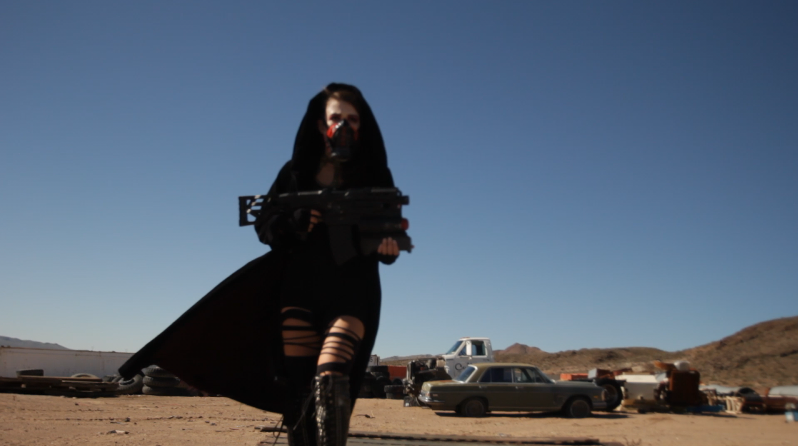 Tell us about you and your film
My name is Gregory Hines and I am the Writer-Director of the short sci-fi film MOD-X. The film centers on a post-apocalyptic Earth where a hacktivist Deacon threatens the elite class known as Sanction from escaping to the new found planet called MOD-X. A bounty hunter is sent in to stop Deacon before he reaches the satellites and destroys the mainframe computers.
The film has been a trying experience where filming took 14 days that spanned over 6 months and post production is reaching nearly four plus months. To create images of a post-apocalyptic world I utilized the vast landscape of the Mojave Desert. Moreover, for the end sequence I found a junkyard that was privately owned in the middle of nowhere which allowed us to create that wasteland feel. After we finished filming I handed off the images to the VFX team and they began the process of matte painting and enhancing the environment to create images the rival’s large budget films.
What were your influences in creating MOD-X?
For inspiration on my film I looked to The Book of Eli, Mad Max (the original series), The Road, Saving Private Ryan to Star Wars (again…the original). I wanted to create a look of isolation and the feeling of stress that gradually builds up towards the end. Utilizing the look and sounds from these films helped me create a solid foundation for MOD-X. However, my biggest influence was Shakespeare as I am a fan of Greek tragedies.  Not to set off a spoiler alert but I utilized the essence of the tragedy to MOD-X so that is raises questions on humanity.

What are some of the highlights of making MOD-X?
The best aspect of making MOD-X was the team of professionals that I have been fortunate enough to work with. Every single person has had a great personality and watching them work really felt like magic. Watching characters come to life in front of you to hearing the dynamic components of post audio come together is nothing short of amazing. You really have to have people you can depend on and get along with because the days are long and the work is demanding. While filming, we would be in high winds that blew sand everywhere….in your eyes in your equipment…plus the temperatures can easily reach 115F degrees. Add this to heavy layered wardrobes plus makeup and props and things get serious fast. In the end, we pulled it off and our VFX team is now working diligently to complete the film.

Do you have any tips for our readers that are trying to break in the industry?
Anyone attempting to get into filmmaking should first learn to plan, plan and then plan some more.  There is such a high rate of films that never get finished for several reasons most of which could have been avoided in the pre-production phase. Next is have a good attitude and show gratitude to those who help you. No one wants to work with a tyrant and showing respect goes a long way. Additionally, know what you want and be excited about what you do. People gravitate towards people that are excited about their projects and know what they want. However, the biggest rule to filmmaking is never forget to have some fun!