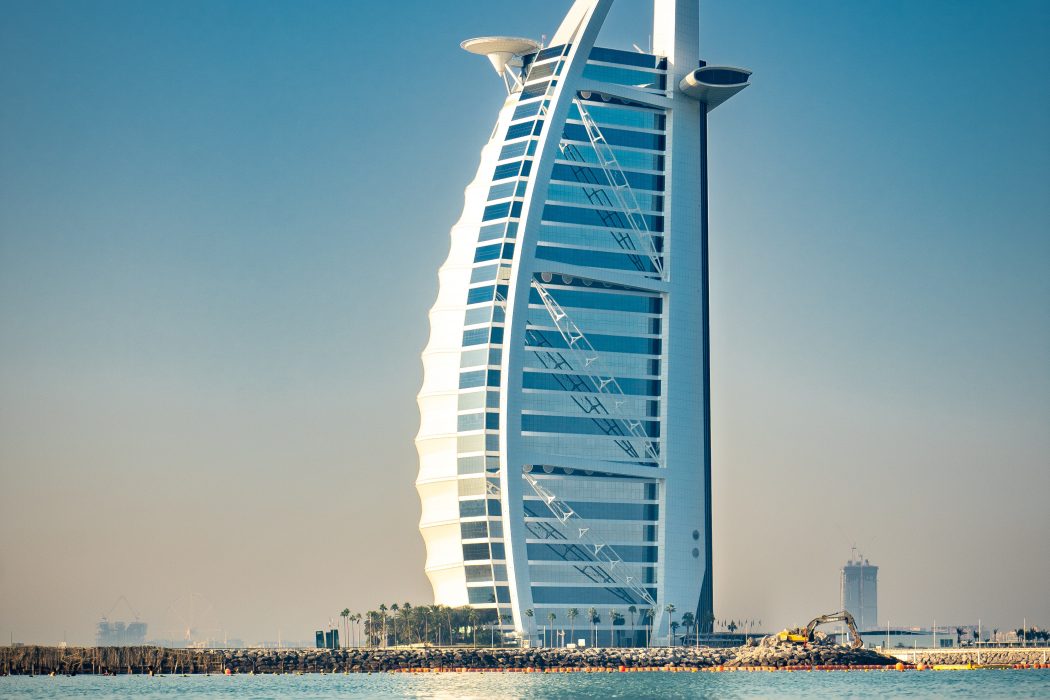 The iconic mega-structure that graces almost every postcard from Dubai, and rightfully so, is the mesmerizing Burj Al Arab Jumeirah. So, let us decode some really interesting facts about the world’s only Best 7 star hotel Dubai, which has redefined luxury hospitality.

The Burj Al Arab Jumeirah has been on a record-breaking spree ever since its inauguration in 1999. It still holds the title of the “Tallest all-suite Hotel” of the world standing at 321 meters, about 14 meters higher than the Parisian Marvel – The Eiffel Tower.

It also made headlines in 2008 and another Guinness world record by creating the most expensive cocktail. Rightly named 27.321, as it retailed for a whooping AED 27,321 for a set of 10 different cocktails.

In 2009, Amstur custom made the largest tin of delectable dark-grey Empress Caviar which weighed 17 kilograms. Empress caviar is the only fully certified organic caviar, which is extracted from native raised sturgeons.

The flooring and walls of this modern marvel have been crafted out of pristine white and extremely rare Statuario Marble. This is the most expensive marble that comes out of Italy’s Carrara’s quarries and was used by the great Michelangelo to carve out his masterpieces like the Statue of David.

The Japanese restaurant, Jusui, houses the largest Swarovski encrusted ceiling in the world. 21,000 Swarovski crystals have been incorporated into the design of the glittering creation to represent the Milky Way and the brightest stars in space.

The Eider duck is a large migratory sea duck that comes to Iceland for breeding. The Mother Duck plucks its own down from its breast and lines the nest with it to keep the eggs warm and protected. This eiderdown is painstakingly harvested from the abandoned nests once the breeding season is over. Each nest renders only about 15-20 grams of down, which makes is super precious in the world of quilts. The supremely soft and warm down is used to make the comforters that grace the beds of the Burj Al Arab Jumeirah’s suites.

The Burj Al Arab Jumeirah has the most impressive staffing ration at about 6 staff per room. There are a total of about 1300 staff under the facility, which includes Michelin Star chefs, mixologists, butlers, florists, and a lot more.

The hotel houses the stunning Ellipse Fountain at its entrance and 4 giant pillars that create the illusion of throwing gigantic fireballs by propelling propane gas, which is non-toxic. The fountain makes use of 20,000 litres of water to create the mesmerizing visuals.

Speaking of entrances, Burj Al Arab Jumeirah makes sure to give their guests a welcome they will remember for the rest of their lives. The infamous Marhaba Welcome gives the arriving guests a taste of Arabian Hospitality with the offerings of rose water, cool refreshing towels, premium dates, and authentic Arabic coffee.

This 7-star hotel employs a massive team of 16 florists who are responsible for the exquisite fresh flower arrangements within the facility. Exotic Flowers are shipped from Holland, South Africa, Kenya, and Thailand to decorate the opulent interiors of the hotel. Interestingly, the hotel suits are always in possession of fresh flowers even if they are unoccupied, which is almost never.

1,790 square meters of 24-carat gold leaf has been used to cover about 22,000 square feet of the opulent interior. Their Gold on 27 bar is, as you would expect, absolutely decked up in shimmering gold, which will bathe you in a warm glow as soon as you enter. If surrounded by the precious metal was not enough for you, then, they also offer a special alcohol-free mocktail called 79 with a grape juice base and a lavish sprinkling of gold dust.

Burj Al Arab Jumeirah offers an incredible private yacht service which is exclusively designed for their guests only. Guests can soak up in the sun and the gorgeousness of the vivid blue Arabian waters as a skilled crew navigates the yacht through the sea. Getting a usual spa is a bit too overdone and boring so that one can invite a spa therapist onboard for a mid-ocean relaxation session. Apart from that, there will be a personal butler, chef, and hostess to take care of you on board.

There is good news for animal lovers because the Dubai Turtle Rehabilitation Project (DTRP) is at the Burj Al Arab Jumeirah, which focuses on treating injured turtles and releasing them back into their natural habitat after their recovery. They achieve their goal in collaboration with Dubai’s Wildlife Protection Office, Dubai Falcon Clinic, and Central Veterinary Research Laboratory.

The terrace that crowns Burj Al Arab Jumeirah is obviously one of its kinds and happens to be a luxurious manmade beach which expands over a whopping 10000 square meter area! The 828 square meters infinity pool extends 100 meters into the Arabian Gulf seamless. There are 32 private Cabanas, 126 Sun Loungers, a freshwater pool spreading over 612 square meters with an incredible swim-up bar. You can expect some world-famous DJ to churn out his or her magic after sundown in this area.

When it comes to luxury and royal hospitality, then nothing can beat the best hotel, and the only 7-star hotel in the world – Burj Al Arab Jumeirah in Dubai’s manmade Palm Islands. Everything about this marvellous structure screams opulence that one cannot possibly forget within their lifetime, which is why you will never find an empty suit in this manmade paradise. So, in case you were wonder where the richer than the rich go? Now you know.

The use of marijuana for medical conditions has been common practice in various areas around the world for thousands of years. The western world…