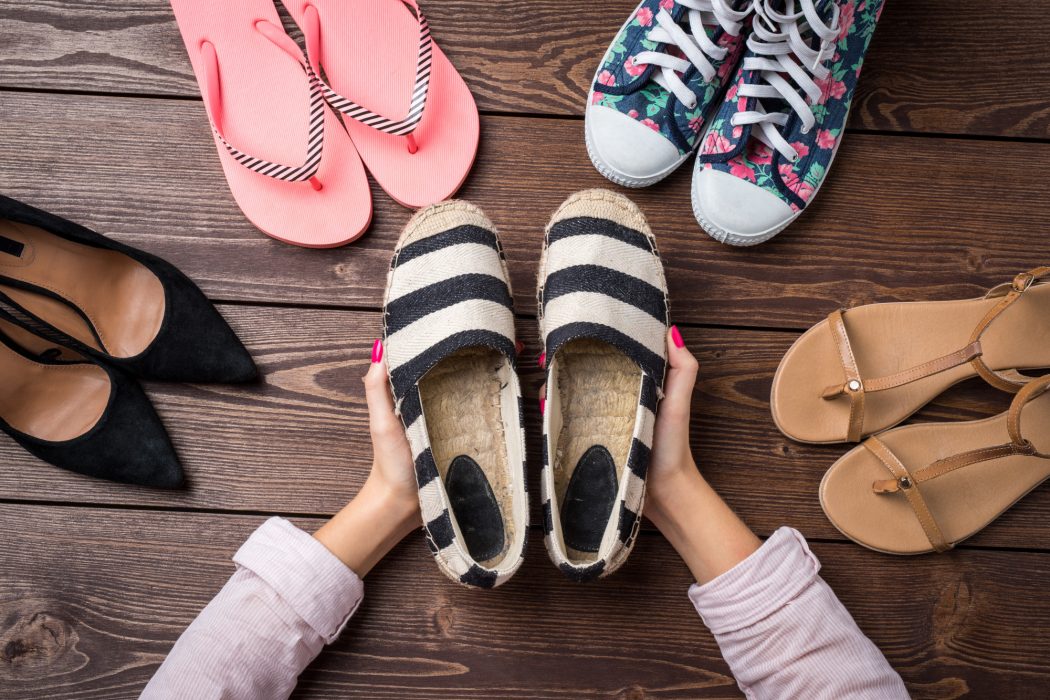 According to one study, women own about 20 pairs of shoes, but the only regularly wear about 5 of them.

While most of us probably own a lot of shoes, how much do we really know about them?

Shoes have been around for a long time, which means that they have plenty of interesting history and fun facts about shoes. We’ll share some of them with you!

1. The Word Sneakers was a Marketing Strategy

One of the most interesting shoe facts is that the word “sneakers” was actually invented as a clever advertising strategy.

A marketing agent, Henry Nelson McKinney, worked for N. W. Ayer & Son, and he came up with the word “sneaker”.

He called them that because tennis shoes were starting to have soles made of rubber, and you could sneak around in them without making any sounds.

McKinney said that the soles of the rubber shoes would let you sneak up on someone, and years later, we still call them sneakers today.

Heels were originally made for people who would go horseback riding. Heels could be traced back to ancient Persia, and they would use the heels to stay strong in their saddles and stirrups.

While the heels started in Persia, they eventually spread through Europe, wear the upper class adopted the style, and started wearing them. After a while, the fashioned spread around the world, even to the lower and middle class.

While both men and women were wearing them, eventually, women became the only ones who would wear them.

3. Shoe Sizes Were Measured by Barleycorn

Have you ever wondered how we measure the sizes of shoes?

Well, King Edward II in England also thought the same thing. In the 1300s, he decided that he would use barleycorn as the standard for foot measurement. For example, three barleycorns would make up one inch.

This gave him a standard to measure shoes and feet everywhere. He issued a royal decree that this would be the standard of measurement, and the United Kingdom and Ireland are still using this system of measurement today.

If you’re interested in finding the perfect shoe for your particular size, you can view more here.

You’ve probably seen the Louboutin shoes with the red bottoms before. These were actually inspired by the Andy Warhol Flowers piece.

When Christian Louboutin saw the prototype for this shoe based on the Warhol piece, he felt like something was missing. When he saw an employee painting her nails red, he knew that that was the color that was missing from the shoe.

He grabbed the nail polish she was using and actually painted the bottom of the shoe.

5. Wedges Became a Thing Because of Trade Sanctions With Italy

While heels were popular, cork wedges also became popular in the 1940s.

Manufacturers used metal to make heels, but when there were trade sanctions with Italy, people couldn’t get all the metal they needed to make their shoes.

Instead, they started using corks and came up with the still-popular wedge.

You know how the heels started, but there was a point in time where heels were extremely high. They were called chopines, and they were made with a wooden platform that would put your feet up higher so you wouldn’t have to walk on anything gross.

Back before cities had plumbing and proper drainage, the garbage would pile up and the cities would be dirty. Walking on regular heels would expose your feet to all of that, so they invented shoes with higher platforms to keep you protected from it.

7. The Shoes from the Wizard of Oz Were the Most Expensive Shoes

The most expensive shoes were actually from The Wizard of Oz, which were the sparkly red shoes that Judy Garland wore.

If you think that you own a lot of shoes, you’re probably not even close to Marie Antoinette.

This queen owned around 500 shoes. This might seem like a lot, but you also have to understand the history of Versailles at the time.

The city was not very clean, and walking around just once, would leave you with dirty shoes. Instead of constantly cleaning them, many upper-class people decided to just throw them away or never wear them again.

In fact, Marie Antoinette loved her shoes so much, that she actually wore high heels to her own execution.

9. Shoes Have Important Meanings in Dreams

Have you ever had a dream with shoes involved? Well, they actually can have an important significance!

When you wear shoes in your dream, it symbolizes being down to earth. If you aren’t wearing shoes, it could mean that you’re poor or that you’re more free-spirited.

If you are changing shoes in your dream, it could symbolize a big change or transition that is coming up in your life.

10. Most Shoes Are Made in China

Lastly, most shoes are actually made and manufactured in Canada.

The industry in Asia is rapidly growing, and they’re creating so many factories to try and keep up with demands. These factories are huge whereas ones in other countries may not be able to handle any of the demands made by the market.

These are only a few of the interesting facts about shoes, but there are many more out there.

It can be difficult to keep up with all these facts and also with the changing trends in fashion. Thankfully, though, we have you covered!

If you enjoyed this article, make sure that you explore our website to find more just like this one!

Iconic Experiences Music Lovers Should Have Before They Die

Music is everywhere. You may like to listen to it on your phone, or perhaps you prefer to go to a gig. Whatever your…